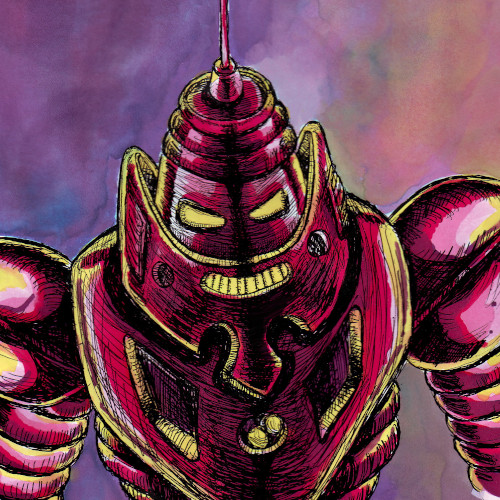 Released:
2005
Version:
2.3
Genre:
Action, Puzzle
Multiplayer:
1
Translation:
French, English
System Requirements:
Windows 95+, DirectX 7+, Gamepad compatible.
Other:
Coded with BLITZ PLUS. Single graphic mode 640x480 full screen. Technical support closed.
Purchase:
100% free!
Download file(s)
Windows
Portable version
Doctor Rolland Brium has discovered a giant meteorite which is able to absorb everything in its path. The latter is dangerously approaching the Earth. That's why, all by himself he makes up his mind to turn into a robot and to head to its hostile surface. Logbook: The scene takes place in 2052. My name's Rolland Brium. I am a doctor in Bio-nanotechnology. During a space mission, a space probe has discovered something weird: a giant meteorite dangerously comes close to the Earth. After deep analysis, it seems to absorb and alter the molecular structures of the planets which are on its way. After endless discussions, the international board refuses to finance its destruction. A few days after, I find out that the major world leaders are leaving to the experiemental Mars station, without telling the truth to the pomulation. I want to carry on my investigations. This meteorite is inhabitted by hostile machines made by an artificial force which is present in its core. I definitely must find a way to destroy it. A few days later I develop a vessel able to stay in orbit around the meteorit (called the Orison), a navigation humanoid (named the TF 800) and a robot able to move on its hostile surface (its name is XG-72). This robot artificial intelligence must be similar to a human being's in order to become fully operational. I am the only scientist who has made it possible to conect a human brain with 72 nanocellulanos with an electronic circuit of XG-type. The application of my theory can't be implemented by the law yet. I transplant my own brain on the XG-72 while my body remains frozen. Here I am on my way to the meteorit... from now on, the future of humanity depends on the success of my mission.
TAKING THE SHAPE OF A ROBOT?
That's the only way for Doctor Brium to move freely on the surface of the meteorit. There is no atmosphere and the ground is really rugged. Moreover, you have to face really aggressive mecanic defense systems. Your humanoid is on board and can help you. 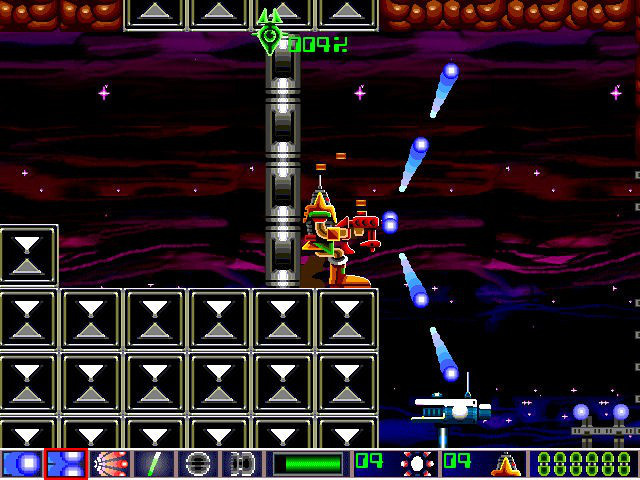 STELLAR STONES?
According to your experiments, the meteorit draws its energy from these stellar stones. In order to desactivate each sector you must collect them all.

When it's over, try to find and activate the radio beacon in order to go on board. 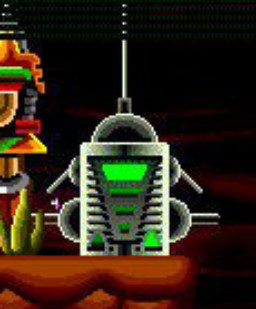 More thoughts than action?
Indeed, because the aim of this game is to collect all the stellar stones at each level. To do so, you will have to use your weapons in an appropriate order so as to destoy vulnerable enemies, or to avoid the traps and to progress from one level to another in a logical way. If you don't want to be detected by the defense systems, you will release your weapons right before landing. Each weapon has a colour code which corresponds to the colour code of your enemies. If your enemy's main colour is blue, you will have to use a blue-coded weapon in order to destroy him. Whereas if your your enemy's main colour is orange, it can be destroyed by any weapon.
Here is the description and the color codes of the weapons:
Name: Simple Shoot
Color code: blue
Attribute: can throw an energy ball forward

Name: Double Shoot
Color code: blue
Attribute: can throw two energy balls (one up, one down)

Name: Multiple Shoot
Color code: red
Attribute: can shoot a multitude of energy balls at a high rate and forward

Name: Laser Shoot
Color code: green
Attribute: can shoot 2 lasers, on upward, the other downward which bounce on the walls of the setting

Name: Mine-Launcher
Color code: grey
Attribute: can shoot a mine which bounces forward on the floor

Any information to help me?
At the top of the screen you will see the percentage of stellar stones you have already collected. 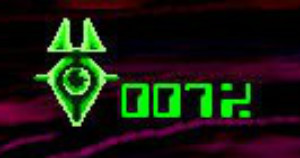 The information-bar is at the bottom of the screen. You can find:

Whenever you press the pause button, the mini-map appears. It can give you valuable information concerning your position, the weapons location, the places where you can find the stellar stones and the radio beacon. 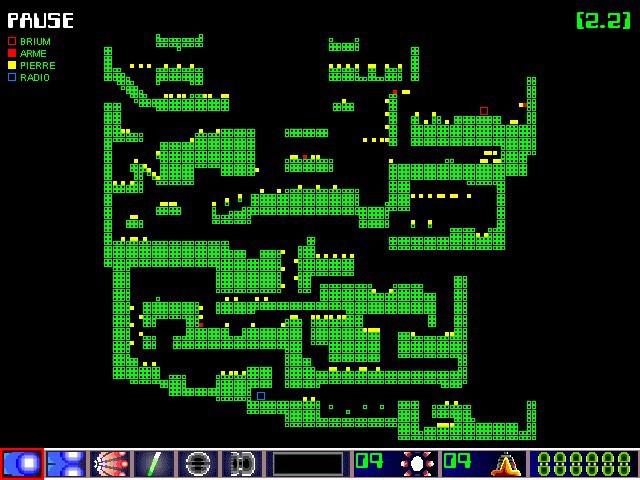 I'm terribly scared, do I really have to go there?
Of course you have to! The future of humanity depends on it! Always keep in mind to be really careful and well-organised when you are looking for the stellar stones. When you are in contact with water, you will slow down. You will also slow down when in contact with acid, and you will lose energy. When you're in contact with the peaks, you will lose all your energy. The game is composed of 24 levels, each of them is divided into 4 levels and 6 sectors. At the end of each sector you will face a guardian and you will have to kill him.
English translation by: Laurence NG
on
2012-12-14
by
Réno Ho
updated on
2020-02-14
at
22:25:52